The renegotiation of the North American Free Trade Agreement (“NAFTA”) has become an increasingly difficult process. This is unsurprising, however, because there is no agreement amongst the member countries as to why the NAFTA needs be renegotiated. Mexico and Canada regard the renegotiation process as an opportunity to modernize NAFTA. Although the United States does share this objective, the main U.S. interests in the renegotiation of the NAFTA appear to lie elsewhere. In particular, a key target for the U.S. Government in renegotiating NAFTA is reducing the bilateral trade deficits that the United States has with both Canada and Mexico. Because looking at the key facts involved is always helpful for finding a mutually agreeable solution to any controversy, in this first Post I present some basic data regarding U.S.- Mexico trade since the inception of the NAFTA.

In future posts I will comment briefly on the viability of Mexico’s alleged “Plan B” (i.e., ramping up exports to third countries) in case NAFTA falls apart, on how the United States might fare in such circumstances, and on how U.S. exports could be further boosted within the framework of the NAFTA. 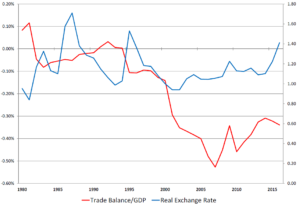 [2] The U.S. Census data on bilateral trade balances are available beginning in 1985. Data before 1985 are available from the International Monetary Fund’s Direction of Trade.

[4] Interestingly, at least since 1990 Mexico has posted routinely deficits on both its trade balance and its balance of trade on goods and services; however, the Mexican Government attaches no particular importance to this fact.

[6] Own calculations on the basis of data from the U.S. Bureau of the Census. In particular, to arrive at the US$ 42 billion figure the relevant increments in U.S. exports were added up. Such increments were calculated by deducting U.S. exports in the relevant base year (the year in which the respective free trade agreement was adopted) from U.S. exports in 2016. The list of the free trade agreements involved was taken from World Trade Organization, Trade Policy Review – United States: Report by the Secretariat, WT/TPR/S/350, circulated on 14 November 2016, at page 30, Table 2.2.1.

[7] This expansion in demand is similar to what happens in a market upon the arrival of a low-cost airline.

This a first post in a series of posts commenting on the NAFTA renegotiation process. For Part II click here.